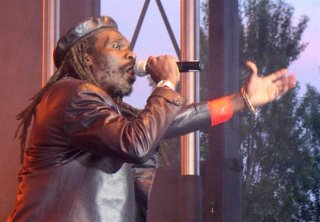 This has been a bad year for the loss of important Jamaican artists - Hearwax tipped me off to this and I thought I'd share it with those who haven't heard yet...

Hill abruptly fell ill and died in Berlin while the group were in the middle of a European tour, according to his daughter Andrea. She did not know the cause of death.

The group's Web site said the band will continue its summer concert tour as a tribute to the smooth-voiced tenor, with Hill's son Kenyatta taking on lead vocals.

One of reggae's most enduring bands, Culture was led by Hill for three decades. Hill penned the group's best known songs, including "Two Sevens Clash,'' "Natty Never Get Weary'' and "I'm Not Ashamed.''

Born in the rural Jamaican parish of St. Catherine in 1949, Hill began his musical career in the late 1960s as a percussionist.

As the Rastafarian influence on reggae grew in the 1970s, he formed Culture and remained its driving force through more than 30 albums.

Hill said "Two Sevens Clash,'' Culture's most influential record, was based on a prediction by Pan-Africanist Marcus Garvey, who said there would be chaos on July 7, 1977, when the "sevens'' met. With its apocalyptic message, the song created a stir in his Caribbean homeland and many Jamaican businesses and schools shuttered their doors for the day.

In 2005, the singer, a devout Rastafarian, was honored by the Jamaican government for his contribution to the island nation's culture.

Andrea Hill, of Kingston, said funeral arrangements for her father had not been scheduled."

...man, this just ruined my day. I got to see Culture live on 2 occassions and because of work wasn't able to make it to their last show when they made it to my area. Again it just reiterates the need for reggae fans to show their support for these veterans and if you've never had the chance to see them live you have to make every effort neccesary to see them when they tour before they're gone. I'm thankful I got to see Mr. Hill and Culture the times I did and I'll always be thankful to him for the decades of beautiful music he's bestowed upon the world. Rest in peace Joseph Hill.

I'm going to share a few of my favorite Culture tunes, taken from various releases, in honor of Joseph Hill. First is from the album Studio One Roots Volume 2 is Joseph Hill solo on a song he would later re-record with Culture called "Behold The Land." Second is the tune "Peace Love And Harmony" from the album Nuff Crisis. Next is "Behold I Come" from the Baldhead Bridge CD. The fourth song is "Natty Dread Nah Run" from the Cumbolo album. "Hand A Bowl" follows that from the album Good Things. Finally I want to leave everyone with one of the prettiest songs I know and one that I feel is a fitting tribute to Joseph Hill's songwriting talents and more importantly exemplifies his love for mankind as a whole, "Love Shine Bright" from the Harder Than The Rest CD.

Junior Murvin, The Heptones And The Congos In The Black Ark

I never really got into the whole My Space thing so when I first starting hearing about Youtube I thought it too was going to be another site that required too much effort to enjoy... boy was I wrong. I've discovered so many cool reggae clips over the last couple weeks that I've been obsessed with finding more. But as I've been known to do, I'm not merely satisfied with getting to view it for free, I want to own these pieces of history on a more substantial format! But I digress...

This clip I came across last Friday was one that I never knew existed and after a bit of research I found that it was snatched from the 1977 documentary "Roots Rock Reggae" which is now readily available on DVD! I was absolutely floored when I saw this footage from inside the Black Ark! I was always under the impression that Lee Perry's studio was not photographically documented and therefore lost to time but getting to see this mythical/legendary interior in relatively vivid color finally completed the mental picture I had made in my mind when I was first intrigued by that unbelievable sound many years ago.

Of note... the song that's being recorded "Play On Mr. Music" was never released. I've been told the footage we get to see was staged to illustrate how reggae was recorded and not an actual recording session. Finally, the song was supposedly written in response to the attempted assassination of Bob Marley on December 3rd, 1976.

Also - after the Black Ark footage is some nice stuff with The Gladiators recording at Joe Gibbs Studio with Errol Thompson and Prince Tony at the controls and some awesome video of Joe Gibbs' record pressing operation - amazing!
Posted by John AKA Reggaexx at Wednesday, August 16, 2006 5 comments: 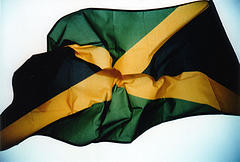 "At midnight on August 5, 1962, Jamaica became a free independent nation within the British Commonwealth of Nations. A ceremony marking the event was held at the newly constructed National Stadium in Kingston, which was filled to its capacity of 35,000.

The chief persons taking part were Her Royal Highness Princess Margaret (representing Her Majesty Queen Elizabeth II), her husband, the Earl of Snowdon, Sir Kenneth Blackburne, who had been nominated by the Queen on the recommendation of our then Premier to be Jamaica's first Governor-General, Sir Alexander Bustamante, Jamaica's first Prime Minister, and Mr. Norman Manley, Leader of the Opposition.

Hundreds of notable guests and visitors from many countries of the world attended, among them Mr. Lyndon Johnson, Vice-President of the United States of America, as the personal representative of President Kennedy. Precisely at midnight, the Union Jack- the British flag - was lowered and the Jamaican flag hoisted. The new National Anthem of Jamaica was sung by combined choirs. This was followed by a magnificent fireworks display at the Stadium.

In other parts of the Corporate Area, and in the country parishes, there were also displays of fireworks. There followed two Public Holidays which were given over to great rejoicing throughout the island. Kingston, the capital, and all other parish capitals were gaily decorated with flags and bunting, highly illuminated at nights. There were many civic and social events and there was public dancing in the streets. When the dust of the Independence celebrations had settled, Jamaica settled down to the business of establishing herself as one of the nations of the world."

Taken from The Geography And History Of Jamaica Number 7 as published by the Gleaner and appearing in its entirety online at Discover Jamaica.com

I was going to upload a great mento track by Charlie Binger & His Quartet called "Jamaica Is The Place To Go" and follow it up with a couple ska tracks, a rocksteady tune and a bunch of other tunes from the roots and rub-a-dub era that all pay tribute to Jamaica. But being that I'm at work this afternoon actually working for a Jamaican co-worker and friend who is attending some local Independence Day festivities... it ain't happenin'.

So in honor of the holiday I'm going to share, for educational purposes only, the Early B song "History Of Jamaica" taken from the Sunday Dish album. It's a mini history lesson on the Answer riddim and if you've never heard it before I think you'll be impressed. 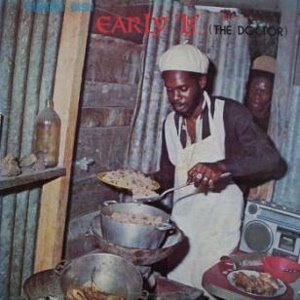 History Of Jamaica
Posted by John AKA Reggaexx at Saturday, August 05, 2006 7 comments: 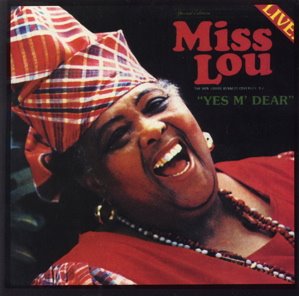 Now, due to underwhelming response or maybe because the visitors to this blog respond better to aural stimuli, I present 6 tracks taken from Miss Lou's Yes M'Dear CD that'll give those interested a little taste of her importance to Jamaican culture. I sadly have to admit that I purchased this album after I had learned of Mrs. Bennett's passing even though I've been aware of her work for close to 20 years. But oddly enough I found a true word of wisdom when I went to Amazon to find the CD. One particularly dim witted buyer had assumed it was a reggae CD and went on to ridicule the album...

"NOBODY TOLD ME THIS WAS A JAMAICAN COMEDY CD! I spent 16 bucks on it thinking it was reggae. It wasn't! It sucks! I can't understand her. The songs are 20 seconds long, followed by 5 minutes of Gabja wa loogado box o rum dum dum crap. DO NOT BUY THIS COMPACT DISC!"

The third reviewer from the Virgin Islands came to Miss Lou's defense and I thought it really made a valid point...

"As a West Indian I was offended by that last review. The same patois that Miss Lou tells her stories in and sings in is the same patois that Reggae legends Peter Tosh, Jimmy Cliff and Bob Marley sang in and modern artists, Lady Saw, Sean Paul, Beanie Man and Elephant man chant in. So how can you claim to like reggae and insult Miss Lou. She's preaching about the mother culture that gave birth to Reggae. You can't love the child and kill its mother...that's harsh. Miss Lou is a Caribbean gem...she is beloved from Jamaica - her home right down to Trinidad."

The first track is called "Long Time Gal" and is one of the three actual songs that I'm posting that definitely have more of a Mento feel. Second is a monologue called "Jamaica Language." Third is a reading of the poem I shared "Colonizing In Reverse." The fourth track is a lengthy monologue where Miss Lou discusses the legendary children's television show she did for nearly 20 years and it's called "Ring Ding." Of more interest to reggae fans, or more specifically for those fans of dub poet Linton Kwesi Johnson is the second song I'm upping called "Coconut Tree." If you ever wanted to hear LKJ "sing" a Jamaican folk song here's your opportunity! It's pretty funny to hear Linton's delivery and the obvious reaction it got from the crowd - good stuff! Finally I end up this share with "Walk Good" as a fitting final tribute and as the song says... Walk good, Miss Lou.