Coming Thursday! The Countdown To Halloween! 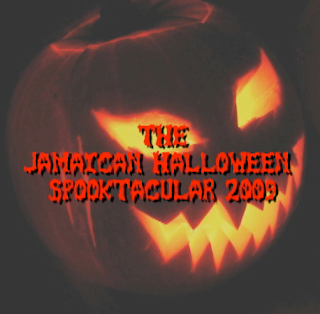 I don't know why I punish myself by doing this every year but Thursday marks the beginning of October and my yearly countdown of spooky themed Jamaican tunes... a little mix I like to call the Jamaican Halloween Spooktacular. Now if you're new to the blog I should probably fill you in how I go about doing this... I post an individual song every weekday in the month complete with scary sound effects and soundbites from old Halloween records, movie trailers and other creepy stuff I accumulate throughout the year... you download each tune individually then reassemble them in order on your Itunes or on a CDR and you'll have the complete Halloween mix and a nice sampling of the haunted sounds of Jamaican music!

"Haunted sounds of Jamaican music?" you may ask. Yes, just like any mainstream genre of music, Jamaican musicians and artists, ranging from calypso styled mento of the 1950's to ska to rocksteady to reggae and all of its various incarnations in between until today, are capable of recording material that explores themes and subject matters outside the stereotypical notions of what a lot of people think reggae "is about." Over the last 5 years I have researched and sought recordings in any of the aforementioned subgenres of Jamaican music that explore subjects and use titles that would be best suited for late night horror movies.

Yes, I know many will find this hard to believe but there is a dark side to this music and though it doesn't begin to compare in intensity to death metal, slasher films or any other genres that people closely associate with black eyeliner and body piercings, I believe it holds its own with the rock and roll styled Halloween novelty music everyone knows and loves.

I should probably back up a bit and let you know why I've been doing this for the past 4 years... Aside from my 20+ year obsession with Jamaican music, I love Halloween, horror movies, EC horror comics, monsters and all that scary shit that goes bump in the night and I have ever since I was a kid. I mean I grew up in the safe confines of suburban America in the late 70's and early 80's... watching the same Saturday morning cartoons while eating the same Count Chocula, listening to the same Top 40 Music and being your typical American kid.

I initially got into reggae music when I was about 15 and there was that teen stage where I tried to identify with the patchouli/hippy crowd that many associated with reggae but I just didn't fit in. Sure I had the long hair and the goatee but my love of this music went far beyond trying to look hip and working to be a part of a scene. I completely immersed myself in discovering 50 years of Jamaican music instead... all in between skateboarding, watching horror films, making horror movies about my murderous elderly neighbors, driving my 1951 Ford and getting my ass in gear to prepare for community college ... now that I think about it... maybe I should have devoted more of that time to experimenting with drugs and getting laid but that's probably something I need to discuss at length with a therapist (lol). I have very clear recollections of a long awaited box of records from RAS Records arriving on Halloween and my friend Nick and I listening to them before gearing up for whatever Halloween festivities followed that evening. I guess the long and short of it is that I don't see anything odd about the peaceful coexistence of reggae and Halloween... to me they've been that way for as long as I can remember.

So please, give the Jamaican Halloween Spooktacular a chance. I think you'll be pleasantly surprised by what you hear! Keep tabs on the blog throughout the month of October and whatever you do please leave some feedback.

If you're into Halloween, like I am, you're gonna have a fun month ahead... and be sure to check out the gargantuan listing of blogs and sites that'll also be doing Halloween countdowns of their own! 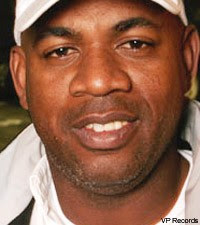 Some sad news in the reggae world... taken from the Jamaica Gleaner dated September 2nd and quoting directly from the write-up by staff writer Howard Campbell...

"Wycliffe "Steely" Johnson, half of the influential production duo Steely and Clevie, has died. The keyboardist, who was in his early 50s, passed away in a New York City hospital yesterday (Tuesday) morning.

The Gleaner has learnt that Johnson suffered heart failure around 5 a.m. yesterday and died at 10:32 a.m. at Brookhaven Memorial Hospital in Long Island, New York.

His medical problems began last December when he was being treated for kidney failure at the University Hospital of the West Indies. He went to New York for further medical treatment, where it was discovered he had a benign tumour on his brain the size of an orange. It was successfully removed at Brookhaven but he later contracted pneumonia.

Although the Trench Town-born Johnson was best known for creating some of dancehall's biggest techno jams of the 1980s and 1990s with drummer Cleveland Browne, he started his career as a studio musician.

He worked with several producers, including Augustus Pablo, and was a founding member of the Roots Radics studio band for producer Henry 'Junjo' Lawes, owner of the Volcano label.

Johnson and Browne became an official unit during the 1980s, after playing on Bob Marley and the Wailers' Confrontation album. They were members of producer Lloyd 'King Jammys' James red-hot team that played on a flood of hit songs by Admiral Bailey, Shabba Ranks and Nitty Gritty.

While they were one of the most in-demand producers in 1990s dancehall, Steely and Clevie said one of their most cherished projects was a Studio One tribute album they recorded in 1992.

The set featured covers of 10 songs from the legendary studio. One of them, Dawn Penn's "No, No, No" became an international hit two years after the album was released by Heartbeat Records and resurrected the career of Penn, who first recorded the song at Studio One in 1969.

"The first song I played on a piano was "No, No, No." I always wanted to do the song, it's something Clevie and I premeditated for years," he said in a 2001 interview.

The following year, the duo hit it big again when their production of Sean Paul and Sasha's "I'm Still In Love With You" entered Billboard magazine's pop chart. The song was originally done in the 1960s by Alton Ellis and his sister Hortense.

Culture Minister Olivia Grange paid tribute to Johnson, saying in a statement, "Jamaica has lost another brilliant musician but we must give thanks for Steely's creativity and abundance of talent which enriched our music immeasurably.""

Below you'll find the tracklisting for the Steely Tribute Mix...

Posted by John AKA Reggaexx at Thursday, September 03, 2009 4 comments: