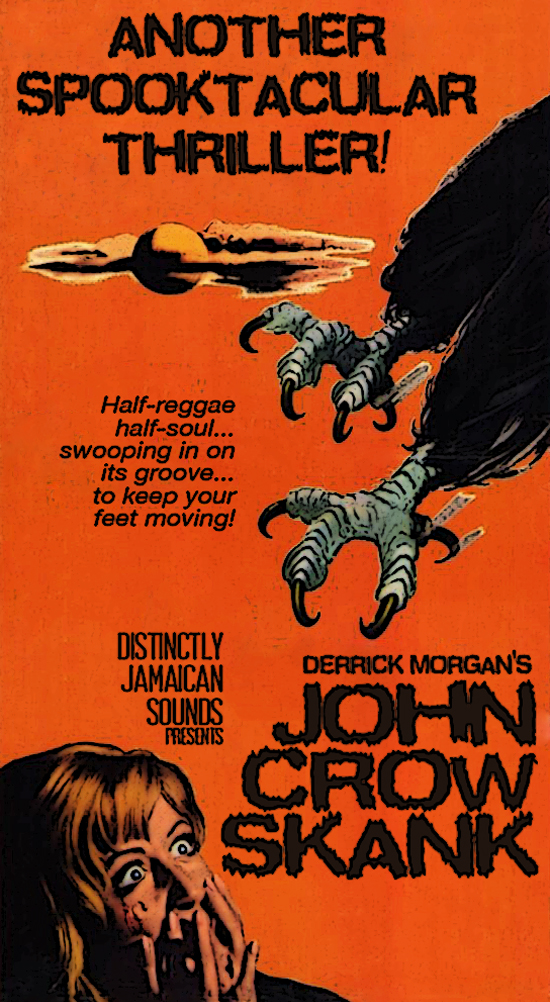 Brian "Uncle Fee" Schaffer was born in Wales and relocated with his family to London when he was 4.   In the early 1960s with the influx of Jamaican immigration, Fee was exposed to a completely different culture and had his eyes opened to Jamaican music as well.  In 1968, a friend gave him a box of rocksteady records to play at his 16th birthday party and he was completely hooked, spending the entire evening and much of the early hours of the following morning playing these tunes over and over.  Today Fee is the Master Selector and the Pure Revival Soundman for Black Harmony Sounds UK and loves this music as much today as he did 47 years ago!  Thanks Uncle Fee!

"The name John Crow is associated in Jamaica with the Jamaican vulture which itself was often called carrion crow or turkey vulture and according to Frederic G. Cassidy and R.B. Lapage, the term "John Crow" was first used in 1826.  They also concluded that the term was or could have been taken from the US term Jim Crow although subsequent research by others has not been able to conclude this statement.  In fact Jim Crow, a term that was not used for at least two years John was used to describe racial segregation

The John Crow has long been a part of Jamaican folklore and is associated with ugliness, blackness, evil and disgrace.  It is believed that if John Crow sits on a rooftop that a death of someone in the household is imminent.  Seeing John Crow in dreams is also an omen of death and possible destruction.

To further illustrate how much John Crow is used in daily life in Jamaica, her is an extract from internet site Pancocojams...

"The name John Crow appears in a few Jamaican proverbs.  "Every John Crow tink him pickney white."  This means that everyone thinks that their own children or possessions are the best in the world.  "John Crow she him a dandy man but same time him hab so-so feather."  Here the John Crow is a symbol of someone who is being vain or pretentious.  "John Crow a roast plantain fi yup."  Depicts someone who is very meager and emaciated who may soon die.  "If yuh fly wid John Crow yuh mi nyam dead meat."  Expresses the idea that a person is capable of doing the things that are done in the company that her or she keeps.

Two popular folksongs also exist which speak about the John Crow.  They are "Peel Head John Crow" and "John Crow Seh."  Whatever the John Crow represents or however the name originated, it is one of the most significant birds underlining the culture."


Incredibly enough I remember as a very small child growing up in Wales, a nursery rhyme that my Mam sang and even to this day we still sing on occasion that references Jim Crow.  If it has any connection to the U.S. one I have no idea.  Here in all its glory with an interpretation.

There's mamma coming, over the white stile;
Something in her apron and a pitcher on her head;
The cow's in the byre, lowing for her calf,
The calf is on the other side, shouting 'Jim Crow'
Jim Crow crust, one two four;
The little pig is sitting, pretty on the stool.


This was published in 1895 so it could well have been influenced from abroad and remember there are a lot of Welsh names in Jamaica.

So when listening to Derrick Morgan's "John Crow Skank" why do we hear no reference to the bird itself unless of course that "chwaki chwaki" we hear throughout is possibly a reference to its call?

Interestingly enough, I did buy this record on release from the R&B Record Shop, Stamford Hill, London in I think 1971 and it was a popular play out tune at the time and had a great organ lead version of "Let The Power Fall On I" (my favourite side) on the flip.  It also uses the same rhythm of "Cherry Oh Baby" which was a massive hit for Eric Donaldson both in JA and in the UK.  Which came first?  I can't remember doh!!

Laughed till I choked at that intro sample. You rule, man.