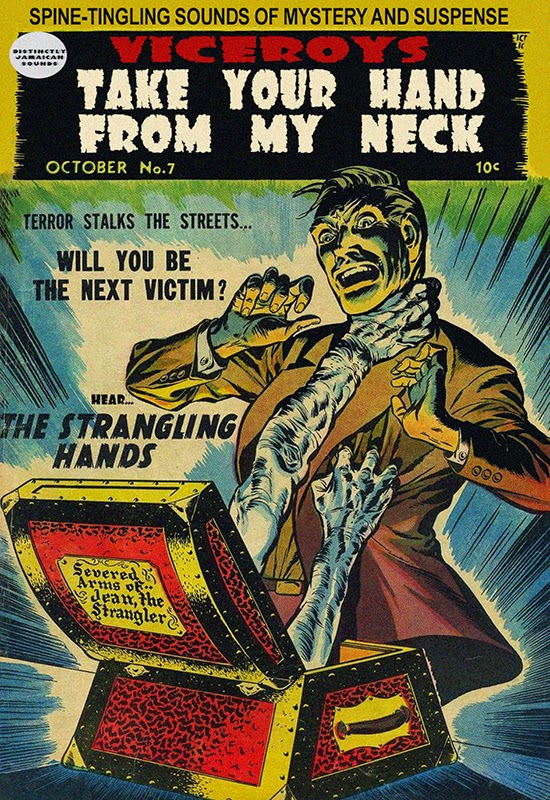 And yet another great early reggae track to keep you shivering... or at least loosening your collar.  This record, "Take Your Hand From My Neck," originally pressed on the Crab label in 1969, was incorrectly credited to the Paragons when in actuality it was the Viceroys. A perfect tune for the mix and a cover that again illustrates the title perfectly!

Spooktacular Track Twenty One - Viceroys - Take Your Hand From My Neck
Posted by John AKA Reggaexx at Wednesday, October 29, 2014

Glad you're enjoying the mix! I will re-up the missing Spooktaculars this evening... I usually post the re-ups earlier in the month but I didn't get the usual requests so I assumed everyone was up-to-date on their previous Jamaican Halloween Spooktaculars! Look for them tonight!

Thanks John, I'll be looking forward to them!

Masterpiece!
From the opening gurgle to the last scream's echoes, a total masterpiece. The tune's jauntiness only heightens the contrast. John, you and Roger have utterly surpassed yourselves this year.

The comic cover is sublime. I even love how Jean the Strangler seems to have had two right arms!

At this rate I'll have expired from fear or sheer pleasure before the Big Night tomorrow.
Curse you, Reggaexx!!!!!!!!