Meditations For the New Year 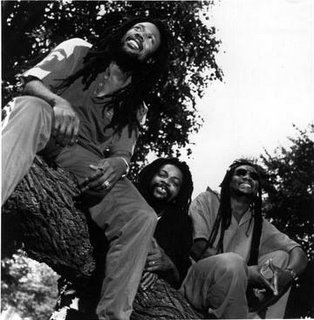 The trio of Ansel Cridland, Danny Clarke and Winston Watson, known as the Meditations, are in my opinion, some of the most overlooked talents to ever emerge from Jamaica. The Meditations formed in 1975 and recorded singles for producers such as Dobbie Dobson and the Upsetter Lee Perry. The trio even remained active throughout the advent of dancehall and continued to release music to favorable review.

If you’ve had limited exposure to the Meditations I highly recommend checking out these 2 tracks that I’m sharing today. The first track “Turn Me Loose” was originally released on their 1979 album “Wake Up.” The second is “Tricked” from their 1976 LP “Message From the Meditations,” featuring a great rhythm section consisting of Sly Dunbar on drums, Flabba Holt on bass and Bingy Bunny on guitar – Sly Meets the Roots Radics!!

These 2 songs and 18 others are featured on Heartbeat’s 1994 “Deeper Roots: the Best of the Meditations," which I recommend highly! I also recommend the 1983 Linval Thompson produced “No More Friend” on Greensleeves to get a taste of their dancehall era sound.

I'm planning on starting off the new year with some Rocksteady so check back next week!
Posted by John AKA Reggaexx at Thursday, December 29, 2005 1 comment:

The Quest For "Smoke Ganja Hard" 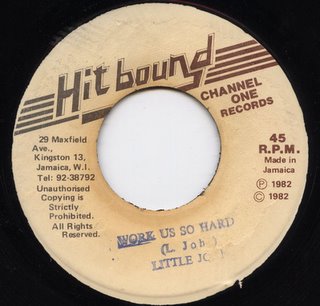 Now that the holidays are over, well Christmas is over and we still have this business with New Years to finish up, I thought I’d get back to posting a little early. Sit right back while I tell you the tale of this record…

I first heard this track about 13 years ago while listening to a taped radio broadcast of an unfortunately short-lived reggae program hosted by RAS Records’ Doctor Dread. But on this particular evening former RAS employee and super nice guy Tim Harris was selecting the tunes. I had met Tim at a local record convention and was absolutely floored that while digging through his bins I discovered nothing but reggae music. Usually you’d be lucky to walk away with one reggae record at these conventions and I was nearly at the point where I considered abandoning my fruitless searches and contemplated collecting KISS and Led Zepplin records that seemed to be everywhere (just kidding). I snatched up about 25 LPs and got to talking… I told Tim that I was really looking for early 80’s dancehall in particular rare stuff from Yellowman, he took my address and about a week later sent me 4-5 cassettes full of stuff I’d never heard before – as well as some print-outs from a Japanese catalog that showed his entire discography from that point and showed an album cover of each release and a few Yellowman promo pieces from RAS. I was floored!

We kept up correspondence from that point on and I listened to “Night of the Living Dread” religiously. Then I heard it that one evening in June of ’93… Little John singing over a hardcore rub-a-dub rhythm track that had me near tears… it was one of those songs that just reaffirmed everything I love about Jamaican music! I had to have a copy of this record! I called Tim and asked him what it was, he said it was called “Smoke Ganja Hard,” and he played it from a 10” in his personal collection. He told me it was a hard one to find and that if I ever came across it I should expect to pay some big bucks for it.

Well fast-forward 6 months to December. I had been a regular buyer from a guy out in Washington who used to run a mail-order reggae business called Outernational Records. He used to send you a listing of all the records for sale separated by label and would occasionally list harder to find vinyl up for auction. I made it a habit of scanning the first come first served section and racing to the phone to try for any Volcano or Greensleeves singles he had in the list. This was before early dancehall had gained real popularity and prices were always cheap - $3 - $4 a piece. But while I’m scanning through the latest list I’m listening to the cassette Charley would throw in with your packet that included :30 snippets from all the records up for auction and I heard the familiar strains of my Little John track! I nearly flipped! I ripped through the zeroxed sheets and found it almost immediately… Little John – Smoke Ganja Hard 10” on the Channel One label! I placed a bid for $145.00 – and worried about how I was going to come up with the money when I surely won the auction! But it was all in vain… I didn’t win.

So eventually I figured I’d settle for any vinyl copy of this song, this was long before a lot of reggae was available on CD, and I came across the track on a clash LP with Little John and Frankie Paul called “Showdown Volume 6” that I tracked down and bought from Ernie B’s Reggae. I was satisfied that I now owned Smoke Ganja Hard but a little disappointed I couldn’t groove to the dub version

So about 4 years ago I contacted Outernational again, this time via the web and scanned through his list of first come-first served and saw a 7” record called “Work Us So Hard” by Little John on the Hitbound label. I was quite familiar with the ongoing practice in Jamaican music of giving one song many different titles and I knew I had struck gold! I had finally found the single that I had been searching for for nearly 10 years! The price? Four dollars! I was giddy when the Outernational packet arrived and tore it open at the mailbox and there it was. Not too pretty looking a record but nonetheless I raced to the turntable and dropped the needle… and those familiar strains delighted my ears at long last.

Here it is… From 1982… Little John’s “Smoke Ganja Hard” or “Work Us So Hard” if you prefer, on the Hitbound label.

Unfortunately since the advent of online music the track is now available from Itunes on a various artists compilation. Oh well… their version doesn’t include those nice pops and clicks or the b-side version! Enjoy!

Have Yourself A Merry Reggae Christmas II 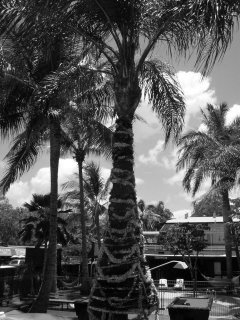 I wanted to share a few more palatable reggae Christmas tracks before my holiday hiatus and here they are...the Eek-A-Mouse is a little bizarre to those unfamiliar with his "singjay" style but it's cool nonetheless! Have a very Merry Christmas everyone and I'll see you again in 2006!

Here’s another Christmas present… this is from the album by the late Jacob Miller (accomplished solo singer and former frontman for Inner Circle who died in a car crash on March 23, 1980) & DJ Ray I called “Natty Christmas.” All in all a decent reggae Christmas release but to the untrained ear the vibes are definitely more hardcore reggae than Yuletide. I would assume the messages of suffering, poverty and struggle so prevalent in roots reggae and on this album, though presented in a light-hearted manner on these tracks, don’t really work well in making the season cheerful. Before the advent of online music sharing this late 70’s Joe Gibbs release was rather hard to locate. It was eventually made available to a wider audience when RAS Records re-packaged it in 1987. A repackaged gift that reggae fans didn’t mind finding underneath their Christmas trees. The whole album is available for download from Itunes and Emusic to name a couple…

Jacob Miller & Ray I - Deck the Halls MP3
Posted by John AKA Reggaexx at Tuesday, December 13, 2005 No comments:

Have Yourself a Merry Reggae Christmas 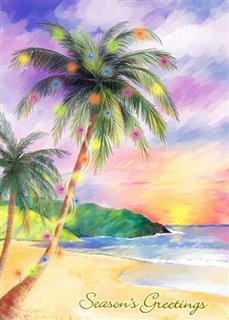 There have been a lot of Reggae Christmas albums released over the last 20 years and the vast majority have in all honesty sucked. There are a few gems on some of the albums but most tracks really come off as sounding cheesy and even I, with a great appreciation of reggae and Jamaican music, wouldn’t want to listen to the crap around the holidays. I have decided to compile all the decent reggae Christmas tracks into one mix and provide them in the hopes that the mix will make an appearance in your holiday playlists to add a bit of Caribbean warmth to the Yuletide season. One Love and Merry Christmas.