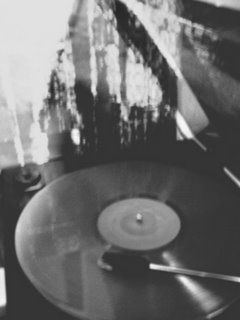 Sorry for the lack of new posts over the last couple weeks but I was invited to spin some music at this month's DC Soundclash and I've been totally consumed with getting my stuff together. It's been years since I've done any DJing, seven years to be exact... my last DJing gig was my weekly Jamaican music program on the local college radio station and I've never spun in a live situation (at least where anyone would hear it) so as you can imagine, I'm excited and just a little nervous. But enough about that...

I just came to the realization that the last song I shared was a soca song... I've left those who have an appreciation for Jamaican music, who actually take time out of their busy lives to visit this blog with a Trinidadian soca song?! I wholeheartedly apologize and present for you listening enjoyment a few Jamaican singles that I hope to serve as my reconciliation offering.

It's quite a mixed bag and sorry for the lack of label scans but I think everyone will find something they like...

The first track is taken from a 7" on the Musical Ambassadors label by singer Edi Fitzroy. The song called "Princess Black" includes the B-side version as is one of my all-time favorite singles from the era. Next I've got a 7" by Tenor Saw called "No Work On A Sunday" on the Pressure and Slide riddim which was reissued on the Penthouse label in 1994. Third, to meet the requests I've received since I posted on Little John a couple months back is a 12" on the M&M Music label and the song is called "I Guess You Love Me Girl." The fourth song is from John Holt - a song called "Tribal War" taken from a 12" on the Channel One label. Finally is a song from the late great Dennis Brown that appeared as a Greensleeves 12" called "It's Magic." Hope you like what you hear and I'll be back soon with a real post.

A Few Singles
Posted by John AKA Reggaexx at Wednesday, June 28, 2006 7 comments:

Thanks Soca Warriors... It Was Fun While It Lasted 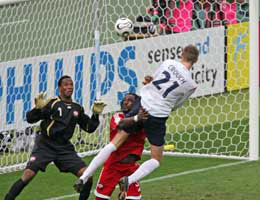 I got together yesterday to watch the match with my English friend Joe and I was quite surprised to walk into a bar in downtown Baltimore and see so many people wearing their England jerseys... for a second there I contemplated taking off my Trinidad hat but I held firm. There must have been 75 England fans and 3 Trinidad supporters so for the first time in my life I got to experience being an opposing sports fan in an unfriendly place. Sadly as we all know, my adopted team lost 2-0 but I was proud of their performace and from what I read online I could see that those in the tiny island nation were proud as well... and I guess that's all that really matters.

Now I know that those who come to this site are looking for Jamaican music but in honor of the boys representing Trinidad I present the Soca Warrior's unofficial theme "Fighter" by the artist Maximus Dan. Now don't get me wrong, I'm not a fan of soca and you'll probably never see me posting another track from this genre, but it's my small tribute.

Thanks Trinidad and Tobago for making this World Cup exciting... at least for me. It was fun while it lasted. Hopefully they'll give it another shot in 2010 but if the time comes and Jamaica beats them and goes on to represent the Caribbean I definitely won't be complaining.

A side note - when I was leaving the bar in a sea of English jerseys a photographer with a massive camera focused on me and took a shot... I wonder if that pic will surface somewhere locally?
Posted by John AKA Reggaexx at Friday, June 16, 2006 8 comments: 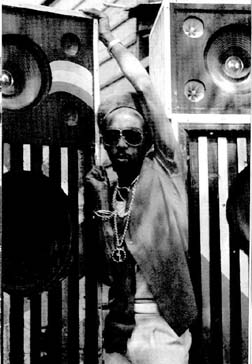 No music today but I wanted to share my new blog still under constuction. Compiling and collecting Junjo's output on the three labels most associated with the late great producer - Volcano, Arrival and Jah Guidance - has been a labor of love for me for the last 10 years. Most of the singles, except those with an asterisk, are proudly sitting on my record shelf and I can guarantee that I've searched long and hard for all of them. Most were purchased before their popularity and prices skyrocketed - many at around $3.00 to $4.00 each - but those days are long since over. I know Ernie B's has got a couple Volcano 12" that he's asking over $100 for and being on a meager income they won't be a part of my collection anytime soon. At least until I hit the lottery which I've been planning on doing for quite some time now! But enough about that...

What I'm planning on doing with the Junjo Lawes Discography blog is presenting a resource that hopefully those who are interested in this lively stage of Jamaican music will find informative. But information isn't the only purpose for the new blog, I will occassionally up a single or two as well as share some Volcano live tapes (that I need to rip from cassette) and every once in a while even a Junjo produced album that time may have forgotten.

As you can see I've been scanning labels, a couple a day, and posting them alongside the mentioned tracks. I'm also adding matrix numbers when I scan each disc and in a perfect world I'd be ripping them to MP3 but I still can't afford a USB turntable... I need to rip them the old-fashioned time consuming way.

But take a look around, I know with such a gap in graphics associated with so many of the records it isn't really much fun to look at, and tell me what you think. And of course any contributions of information to make the discography even more complete and thorough would be greatly appreciated!

More music coming here later this week... I still need to edit the Clarendonians LP so I can share that!
Posted by John AKA Reggaexx at Tuesday, June 13, 2006 2 comments:

In Honor Of The World Cup 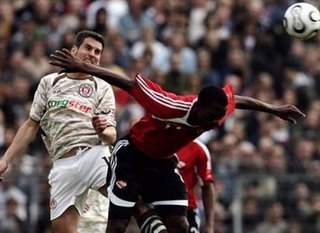 First off thanks to Hearwax for reminding me to get this off my chest...

Being in the States you'd hardly know that one, if not thee greatest sporting event in the world has started today. Of course I'm talking about the 2006 World Cup. On this side of the pond we're too preoccupied about athletic competitions that matter only to Americans to pay any attention to an event that the rest of the world holds their breath for in anticipation. Personally I don't understand why there is a general lack of interest for this global event and in many cases it embarrasses me that the American sports fan is disinterested.

I was in Ireland in 1994 and got my first taste of World Cup mania and honestly it was a life-changing experience. My wife, who was only my girlfriend at the time, is of Irish decent (her Mom emigrated to the U.S. when she was 21) and we were spending a week in Dublin visiting her family who are surprisingly close being 3000 miles away. The match that I got to witness first-hand, or on television actually, was Ireland versus Italy. Unfortunately the pub workers were on strike and we couldn't actually submerge ourselves into the pub atmosphere that would have really been conducive to this experience but nonetheless we got a taste. With most of the extended family plastered to Aunt Marie and Uncle Buddy's TV, sipping on a few cans of Carlsberg, I witnessed something that the majority of Americans haven't understood for quite some time no matter how hard they wave the stars and stripes and proclaim their love of country. I saw unrivaled patriotism, pride and joy that to me is what the World Cup should instill in all proud people from whatever country you're from. When the match was done and Ireland had beaten Italy 1 - nil people erupted out of their houses and into the streets singing and yelling and to this day it still chokes me up thinking about how happy and proud a single football match had made these people... World Cup Football has that effect I guess... I'm just an American what would I know?

Well you're probably asking yourself, what does this all have to do with reggae? Well I'll tell you... Dennis Alcapone. Here for your listening pleasure is the Dennis Alcapone single on the Empire label called appropriately "World Cup Football." 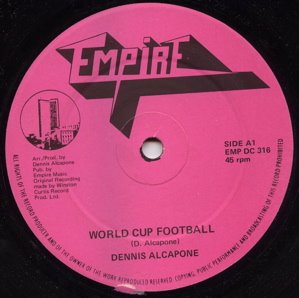 Best of luck to whichever country you're backing! Since Jamaica didn't make it I'm actually rooting for Trinidad and Tobago, I've always been a sucker for an underdog! Especially one from the Caribbean. I see myself spending a lot of time in the next few weeks at my man Joe's house... he's a Londoner and Chelsea supporter who moved to the U.S. about 5 years ago and I know Direct TV is gonna be tuned to the matches non-stop!
Posted by John AKA Reggaexx at Friday, June 09, 2006 8 comments:

The Album "Superstar Yellowman Has Arrived With Toyan" - Or Is It? 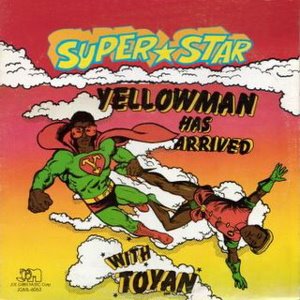 Keeping with the Yellowman on this post... Available for your listening pleasure is the 1982 Joe Gibbs release "Superstar Yellowman Has Arrived With Toyan" which in all actuality should have been titled "Toyan Has Arrived With Yellowman And Ringo." This just serves as a prime example of producers and record companies trying to capitalize on the hottest thing at the time by predominantly featuring Yellowman when he only has 3 tracks on the album. Not to mention the fact that Ringo's song "I'm Getting Married" is credited to Ringo and Yellowman and two of Toyan's cuts are intentionally miscredited to Yellowman on the sleeve.

This isn't the only Yellowman LP I have that includes some shady mislabeling... if you think Superstar's sleeve credits are bad you should check out the Yellowman album "Confessions" on Vista Sounds. This release features Yellowman's image on the cover, Yellowman's name on the label and definitely not Yellowman's voice on the record. I was so pissed when I bought this album nearly 15 years ago... I bought it in London never even hearing it, carried it all the way across the Atlantic thinking I had found a long lost Yellowman treasure with songs that I hadn't heard before and it turned out to be someone else! Damn you Vista Sounds! Oddly enough though the album of early DJ stuff is pretty good... it's Purpleman produced by U-Brown, as Harry Lime corrected me (thanks) but definitely deserves a proper re-release giving credit where credit is due.

But anyway... here is the album "Toyan Has Arrived While Joe Gibbs Threw A Couple Yellowman Tracks On This Album To Boost Record Sales And Threw In A Ringo Track To Fill The Space On The A-Side" or "Superstar Yellowman Has Arrived With Toyan" whichever you prefer. Enjoy!