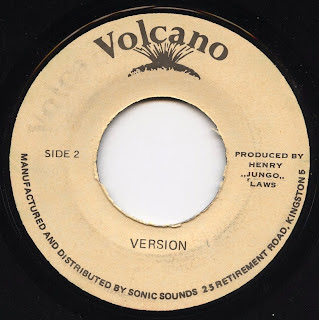 Yes, I've got another "Volcano Version Excursion" and I hope you want to come along with I & I. I've finally gotten off my lazy ass and ripped 12 more assuredly Roots Radics/assumed Scientist mixed B-sides from assorted Volcano, Arrival and Jah Guidance singles and spliced them together into a nicely packaged mix that I'm hoping you'll enjoy. I've put a little more effort into this excursion by weaving in vocal samples from the A-sides so I hope you dig it.

I have also taken the liberty of giving the multitude of versions new titles so that you'll know from what record you're hearing the B-side from... I didn't want to get into identifying riddims because unfortunately I've got a lot on my plate at this time outside of music.

Dig it! And please let me know what you think!!!!

Some more sad news for fans of Jamaican music, another legend has passed on. I just heard of this so instead of spending a lot of time writing up a biography I'll just share verbatim what appeared this morning on the Jamaica Gleaner's website...

Shirley, known for his dramatic stage costumes and performances, was 64.

The British company, Trojan Records which reissued several of Shirley's music in Europe, announced his death on its website.

"Truly unique, Roy was not only one of the true greats of Jamaican music's first golden age, but also a gentleman in every sense of the word, and he will be sadly missed by all those who knew him, either personally or through his music," the posting read, in part.

Hold Them, recorded in 1967, was his biggest hit. It was reportedly the first song funded by a young producer named Joe Gibbs who would go on to find fame in the 1970s with Dennis Brown, Culture and George Nooks.

Hold Them's loping beat was considerably slower than ska and is often cited by musicologists as the first rock steady song.

Shirley had been living in England since 1973."

I have taken the time to compile and mix a 15 song tribute to a true Jamaican original.

Here is the tracklisting...

1. "Flying Reggay" from the Music Is The Key (1967-75) Compilation CD on Trojan
2. "The Fact Of Life" w/the Uniques from the 2004 Your Musical Priest (1966-72) CD on the Westside Label
3. "Hold Them" from the Trojan Carnival Box Set
4. "The World Needs Love" taken off the Joe Gibbs various artists compilation Get On Up! CD also on Trojan
5. "Dance The Reggae" from the various artist album called Do The Reggae - Early Reggae Singles 1968-69 CD also on the Westside label
6. "Get On The Ball" from the multiple artist rock steady CD Caltone Special on the Attack label
7. "Rolling Rolling" also off the aforementioned Music Is The Key set
8. "I Am The Winner" off the Trojan Reggae Brothers Box Set
9. "Shirley" from the various artists ska compilation El Bang Bang Vol.2
10. "Warming Up The Scene" also taken off the Your Musical Priest set
11. "You Turn Me On" from 1976 LP The Winner on the Trenchtown label
12. "Bubble Up" also from the Music Is The Key set
13. "Endlessly" borrowed from the 1983 LP Day One Live At Reggae Sunsplash - Best Of The Festival on the Sunsplash label
14. "I Like Your Smile" from the Trojan Rare Groove Box Set
15. "Who God Bless No Man Curse" also off the Music Is The Key set