King Stitt... the rumors of his death have been greatly exaggerated. 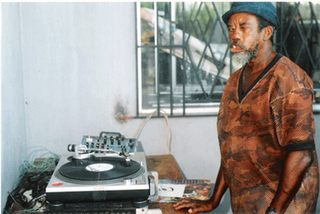 I heard through the grapevine that the legendary Winston Sparkes AKA King Stitt has died...

Lesson Learned; never trust what you hear through the grapevine!

Quoting from the Gleaner...

"Veteran deejay King Stitt is sick but not gone. Rumours began circulating yesterday that the deejay was dead.

Speaking with The Gleaner, son of the legendary Studio One founder Clement 'Coxsone' Dodd, Courtney Dodd, disclosed that Stitt was still alive.

Dodd, who also heard rumours about Stitt's passing, said, "He's sick and was in the hospital for two months."

According to Dodd, Stitt was in the Kingston Public Hospital for the last two months after coming from Brazil and reportedly not feeling well. Stitt was released from the hospital on Saturday, but according to Dodd, the doctors haven't yet discovered what is causing his illness.

"I saw him Saturday," Dodd said. He added, "He's not looking so good, He's still weak and not eating. He's lost a lot of weight and not talking much."

Born Winston Sparkes, he was called Stitt as a boy because of a stutter. Keeping the name, Sparkes called himself King Stitt on stage.

Stitt's long history with Studio One began in 1956 when he started deejaying on Coxson's Downbeat sound system.

Count Machuki noticed him for his dancing and gave him the chance to try his hand on the mic.

Following the folding of Coxson's Downbeat sound system around 1968, King Stitt found himself working as a mason in Ocho Rios. He had been deejaying at the mic for more than 10 years when he was first recorded over brand new reggae rhythms in 1969.

What I thought was a retrospective is now going to serve as a living tribute to Jamaica's Oldest Living DJ and a true originator!