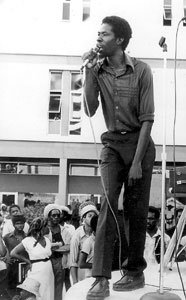 More dub poetry... I've been looking for this album for years and after listening to it all weekend I decided it was too good not to share! Thanks Kerppu!

“Born in 1954 to a working-class family, after attending various schools, Mikey Smith in 1980, graduated from the Jamaica School of Drama with a diploma in theatre arts.

In 1978, Michael Smith represented Jamaica at the 11th World Festival of Youth and Students in Cuba. That year, saw the release of his first recording, a single titled, Word, followed by perhaps his most famous piece Mi Cyaan Believe It and Roots.

In 1981, he performed in Barbados during CARIFESTA and was filmed by BBC Television performing Mi Cyaan Believe It for the documentary From Brixton To Barbados.

In 1982, Smith took London by storm with performances at the Campden Centre for "International Book Fair of Radical Blacks and Third World books". And also at Lambeth Town Hall in Brixton for "Creation for Liberation".

While in Britain, together with Oku Onoura, Michael Smith also did a successful poetry tour and recorded the Mi Cyaan Believe It album for Island Records.

"As far as I understand the facts, Mikey had attended a political meeting in Stony Hill where the ruling JLP Minister of Education was speaking and [he] had heckled her. The following day, he was confronted by three [persons believed to be] party activists, an argument ensued, stones were thrown and Mikey died from a blow to his head," LKJ said.”

Taken from an article that appeared in the
Jamaica Observer on Friday January 18th, 2002. 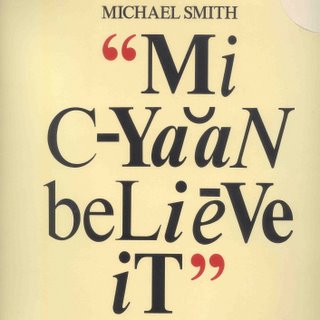 With all this talk of dub poets and serious cultural/societal wrongs and injustices... I promise I'm gonna lighten the mood a little this week! Stay tuned!
Posted by John AKA Reggaexx at Monday, November 07, 2005

I just wanted to say thank you very much for making this long out of print album available online. I've bid a few times on eBay for a vinyl copy, but lost each time. I first heard Michael Smith on the late, great John Peel show when I was 16 or so. As was my habit, I recorded the track - Trainer - on a tape, now long-lost, but the power of that one song has stayed in my memory ever since, more than 20 years down the line.

Seems churlish to ask a favour, but it would be much appreciated if you could enable your newsfeed in Blogger, then I and others can subscribe via newsreader. If you need instructions on how to go about this, please give me a shout. Many thanks once again. ATB, C.

Mi cyaan believe it... I have been looking for this album for years. Great to find it here. Thanks a million!

Be sure that you are not the only one spreading useless beauty around:
http://www.zozolala.com/

Roots is what makes the world go round!
Peace.

give thanks for the mikey smith lp.
I n I have been looking all ovah for this long out of dub treasure.
I find it amazing that you and others can do what others in the music industry have so far refused.

"in desolate places one finds his bread"
Fire pon babylon.

it's now 2007 and i htink i have missed out as the link to share is dead. Can anyone contact me and maybe send me a copy? I had the original vinyl all those years ago but have not re found this music on cd or mp3.

For those determined to own their own copy of this album on vinyl, I have one on ebay right now. Auction ends Sunday, July 8th (2007) at 9 pm PDT. This album doesn't surface often, so strike while the iron's hot!

Huge thanks to the poster who gave the rapidshare link to Mi Cyaan Believe It - it is still working and thanks to them I am once again able to listen to an album I love deeply and have not heard since I last spun vinyl, about 18 years ago.

thank you!!! working, i lost my LP yaers ago, so happy to find it here

Thanks so much! I've been looking for this for years.

the file is no longer available ! :(

mThis is, without a shadow of a doubt, the best reggae album I've ever heard.
The sharpest, funniest most profound reggae album anyone has ever heard. I don't see this album being knocked out of my top-50 albums of all time: not just reggae albums, the whole vast range of my multi-various musical romances.

If I could kill two people without fear of reprisal, it would be the wankers who stoned ()bricked!) Michael Smith to death because of his political savy; hell! I'd gladly send those two to the deepest pit of hell WITH fear of reprisal -- res ipsa loquitur