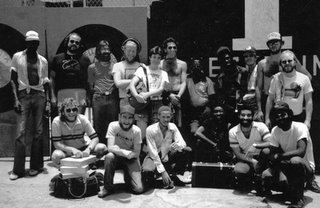 I was never a fan of American reggae but years ago when I "borrowed" the Blue Riddim Band's 1984 LP "Alive in Jamaica" from my college's radio station, that all changed! These guys did reggae just as well as any Jamaican band! Again because of time limitations I'm directly quoting this write-up about Kansas City's preeminent reggae band written by Mike Warren and originally published by The Pitch Aug 29, 2002...

"Twenty-three years ago, Bob Marley played Hoch Auditorium at the University of Kansas. Local fans knew and loved Marley's music, but their regular exposure to roots-reggae came from the opening act, Pat's Blue Riddim Band, and that group's frequent visits to KC's Parody Hall and Lawrence's Off the Wall Hall. Kansas City's PBR, as it was, and frequently still is, affectionately known, held its own with the king of reggae that night.

"We were the first guys down the pike -- we had that opportunity," longtime Blue Riddim drummer Steve "Duck" McLane says, warm memories audible in his voice. "What was really cool [in our career] was having a chance to open for Bob Marley, Sly and Robbie, and Black Uhuru. Every night we'd get clobbered by them, but we'd climb up another notch. It was a real chop-builder."

In its earliest incarnations, PBR consisted of friends who graduated from Shawnee Mission East in '67 and '68. "We were born out of that late-'60s Kansas City scene -- the Vanguard, the Aquarius -- places where people were hanging out," McLane says. "We'd all played jazz and R&B together, in all different kinds of aggregations." McLane, who started hearing reggae when he played in New York and south Florida in the early '70s, immediately knew it was something he wanted to do.

"I came back to KC and said, 'We really ought to try to play some reggae music,'" McLane explains. "It was big-time dance music, and we all love dance music, so we started experimenting. By '74, we had something that was workable, a band called Rhythm Funkshun. That band, basically a rhythm section version of what became PBR, broke up because it was a little bit ahead of its time.

"About a year and a half later, we started PBR," McLane continues. "We were playing 10 percent ska, 10 percent calypso, maybe 25 percent straight-up R&B, and the rest of it would be reggae. People were just everywhere, on top of each other, dancing."

During the early '80s, PBR toured nonstop, burning through two vans and 42 of 50 states. "We just had our nose to the grindstone and never stopped," McLane says. "We really should have taken more time out to record, but it was 'dollar a day, give us what you can' and keep moving. When it got to the point where we could actually play it good, we made a record [1981's Restless Spirit]."

PBR made several trips to Jamaica, where it learned from the genre's best practitioners. "Jamaican musicians are really approachable, and we'd hang out with them -- a cultural exchange," McLane explains. Equally accessible were Jamaican DJs. "When I flew down there in late '81, I brought a box of 25 records, and I thought, What the hell. I'll drive them up to [Kingston radio stations] RJR and JBC. While I was driving to JBC, I heard the song come over RJR -- and I just about drove off the road. I thought, I'm driving around Jamaica, and I'm hearing my own music on the radio!"

Six months later, Blue Riddim became the first American band to play Sunsplash in Jamaica. "We were voted co-'Best Band' of the entire festival," McLane says. "It blew me away that we blew them away. I was expecting pineapples and cantaloupes thrown at us. We're playing these old songs, and we're also from America, and we're also white. It's five o'clock in the morning, and they're going, 'What in the ... ?'"

The track is "Nancy Reagan" and being that I absolutely love some brass in my reggae, this one is my favorite song on the whole album! Enjoy!

i've backed into this blogging thing and am looking at yours for comparison. very nice work ~ i need to work on the visuals of mine for sure. the tracks downloaded fine for me.

Started following PBR in 1977. Was looking for something else besides the late 70's playlist coming out of KC radio.
I used to have, and would kill, to find a soundboard recording of the Sunsplash concert with DJ annoucements and all. Seriously better than the album. Didn't know what I had at the time.

This may seem like a totally random, out of the blue message, but I've been looking for a copy of "Alive in Jamaica" by Blue Riddim Band (or any other music by them). I lost my tape a few years ago -- and painfullyt still have the empty box to remind me.

It's been a desperate search for quite some time. Is it possible that you have this CD/tape/record, or any music by Blue Riddim, and might be willing to copy it for me (for a price)?

Where can I get a MP3 of Blue Riddim's Nancy Reagan song?

my email is inawhilecrocodile AT gmail DOT COM

After hearing BRB in Columbus Ohio in the mid 80's i was lucky enough to become really good friends with Scotty Korcheck while i lived in Key West in the late 80's. He was and is a very cool and down to earth guy, we had a lot of fun and many good times, a lot of laughs, i'll never forget watching the Jay Hawks win the NCAA Basketball Tournament i think in 88 and i looked over and Scotty was crying because he was sooo happy.

He was playing with a band by the name of Irie out of Columbus at that time and they were very cool and had a great sound! Scotty on horns and vocals was as clear, clean and soulful as ever.

Anyway i found this site and thought i would add something since i was and am still a big fan of Blue Riddim band.

today is 7.7.2008 this is in memory of the band's manager, Stephen Zimmerman. This was his birthday and he passed away Jan.29,2007.
He was a great person and talked about his happy days with the band.
Terri

Loved going to Parody Hall (aka King Henry's Feast) for PBR concerts! The very best times I've had. What a party situation!

where can i buy the alive in jamaica cd?? anyone any idea./?

That's the Story of My Life said...

I grew up in Kansas City back in the day and never saw BRB live. Yes, I know, I'm stupid...but my excuse is that I was barely old enough to drive and every time I went to the Grand Emporium they'd kick me out before the band would come on. I'm begging y'all, I'll do anything to get my hands on a copy of "Restless Spirit" and "Alive in Jamaica". I'll gladly pay, I just want some of their sweet soul music in my life!

Hold tight Tausif... I'm amazed at how much response I've gotten over this post over the years! Sometime in July I'll get around to ripping and uploading both Blue Riddim albums and get them on the blog!

Blue Riddim has a new album coming out in October called "Tribute". Look for it on iTunes, Amazon and such. It's going to be CRUCIAL REGGAE!

Loves me some Blue Riddim Band! Consider myself lucky to have danced the night away many times to their sweet soul sounds, and to own both albums, the Nancy Reagan single, etc. Scotty K. died a couple of years ago, and they have just released a new version of Nancy Reagan featturing Big Youth on Rougher Records out of Lincoln, Neb.