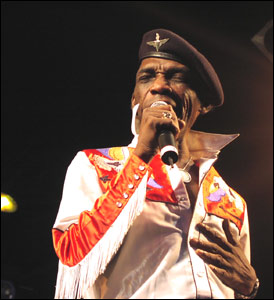 "Desmond Adolphus Dacres, more widely known around the globe as Desmond Dekker, is dead. The ska artiste, who was born on July 17, 1941, in Jamaica, died in the United Kingdom at 4:00 a.m. Thursday.

According to his manager, Delroy Williams, Dekker, who is known for songs such as Israelites, Shanty Town, It Mek, Writing on the Wall and Unity, was not ill prior to his death. "He was not sick; he simply died suddenly this morning from an heart attack," he said when contacted by The Gleaner yesterday.

NO SIGNS OF SICKNESS

Mr. Dekker was also the winner of the National Song Competition in 1968 with his entry Intensified.

When The Gleaner spoke with Lorna Dekker, the sister of the late entertainer, she also explained that he was not sick prior to his death, although he complained of being tired.

"He wasn't sick; he just got a heart attack and died suddenly. The last time I spoke with him was last Friday just after he returned from a tour in Germany. At that time, he was saying that he was tired," she said.

Derrick Morgan, a close friend of Dekker and the person partially responsible for Dekker's introduction to the world after they recorded Honour Your Mother and Father, also reiterated this notion.

"I was speaking with his sister last Friday and she told me he called and was complaining that he was very tired. He is a man that work everyday of the week and has many shows line up so that is understandable," Mr. Morgan outlined.

Desmond Dekker was probably the best-known Jamaican musician outside of Jamaica before the ascent of Bob Marley in the '70s. In 1968, Israelites topped the U.K. charts and reached the top 10 on United States charts. Mr. Dekker was also the first Jamaican performer to enter U.S. markets with pure Jamaican music, a feat he was never able to repeat throughout his career.

According to his sister, it has not been ascertained as to where Mr. Dekker will be buried as some of his family members may still not be aware of his death.

Desmond Dekker has left behind a daughter and a son, other family and friends. According to his official website, desmonddekker.com he is booked until November 18. He had show dates in Poland, Belgium, London, Sweden, Germany, Italy, Czech, Ireland, Switzerland and several other countries."

As a tribute to this legend I'm sharing 5 songs from Desmond Dekker all taken from various releases. He'll be missed...

Desmond Dekker Tribute
Posted by John AKA Reggaexx at Friday, May 26, 2006

man. it hurts... every time. we've got to celebrate these pioneers of reggae while they're still alive. it is beautiful, however, to see the reverberations of their passings in the "blogosphere" (if you will)... they've touched so many lives.

I - I know exactly what you mean. I went and saw Lee "Scratch" Perry Sunday night and it wasn't the best reggae show I'd ever seen - obvious problem was that Scratch had never rehearsed with his backing back - but I found myself during lulls in the music just staring at him and thinking about the history the man had witnessed and the history he had created... it was amazing!

I never got a chance to see Desmond Dekker live and if I did and passed it up, I'd really be kicking myself now. It's really sad to witness the loss of these early pioneers of this amazing and personally life changing music. I got a little choked up this afternoon while driving to work listening to Desmond... I'll miss him.

So sad I never got a chance to see Dekker perform either. The man was definitely one of the towering geniuses of Jamaican music, and no one could sing like him. R.I.P. to the King of Ska...

not to change the subject, but you gotta tell me what lee perry was wearing. only time i had the chance to see him he was wearing a coat made of little round mirrors. and some sort of p-funk looking headdress. and sunglasses. awesome.

jah has called up on him, its very sad but at the same time i feel he is ina much better place, I honestly feel that when you chant in jah's name or chant about something good "jah hears" and a reward is waiting, Desmond is with jah "god" right now and he deserves to be up there with the rest of the massives who jah has called upop :)

Long Live Desmond, we love ya

The first bit of riddym that took my ears and brain by storm was hearing 'Israelites' on a crappy little AM car radio. It was so damn good that I almost ran off the road. The music got its hold on me then and there and it hasn't stopped since.

There have been many voices that have gone the beyond in the last decade, but this is the one I will miss the very most. He pulled this old white boy by his ears into a world where the music is more real than anything else.

i was shocked when i heard the news. i've been listenin to his records non-stop.

i'm gonna add your link to my site, if you don't mind.

thanks for the tribute.

(I can't add anything more that hasn't beeN said already.)

take caRe. i really agree witH "i", these deaths prompt us to appreciate m0re the pioneers of great music that we tend to neglect and f0rget in favor of the latest marketed/manufactured music celebrities.