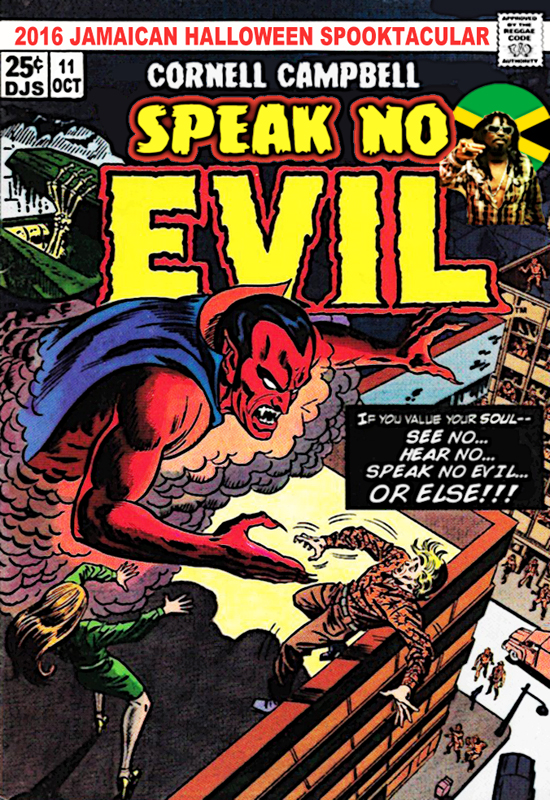 Aside from growing up on the same dead end street here in rural Maryland and being a life-long friend, Nick Jones is a huge reggae fan, record collector, great dad and a devout member of the 12 Tribes of Israel.  Nick is also a highly talented illustrator and DJ for his Napthali Sound and as you have probably heard me mention once before, one of the key contributors to this little monthly thing we have going on called Reggae Spin Cycle.  Once facing charges for "telephone misuse" Nick had to serve 40 hours of community service for making a prank phone call to our high school's vice principal... and there was the time with the pickle jar and the old dude in the mobile home but I'll just stop right there.  Thanks Nick, you've always been like a brother to me!


"Whether it be Ska, Rocksteady, or Reggae- Cornell Campbell has lent his voice to the Infectious beats of Jamaican music for over 50 years. Born on November 23, 1945 in Kingston, Jamaica, he began recording at a very young age.  When Cornell was eleven years old, his friend Rico Rodriguez (an aspiring trumpet player) introduced him to Clement Dodd, owner of Studio One. Dodd, impressed with Cornell's style, cut several tunes which quickly made their way to the dance massive. These initial tunes made Cornell a local celebrity in the sound system arena.

Cornell would then begin recording for Duke Reid's Treasure Isle Studio, forming a group with Jimmy and Buster Riley called The Eternals.  When the group disbanded in 1962 Cornell linked up with producer Bunny Lee; reestablishing himself as a solo artist. “I make several number one hits that really shook up the whole thing, y'know!” stated Cornell in a recent interview. Originally billed as Don Cornel ( the first Don in Jamaica), Bunny Lee mistakenly spelled Cornel (correctly spelled with one ‘l’) with two L's- the mistake stuck and “Now the world knows me as Cornell Campbell! Love and Honor. Respect.”

In 1982 the smash album Boxing was released on Starlight records. On Track #4 entitled Speak No Evil, we hear Cornell’s sweet voice issuing a plea for the love in his life not to allow rumors of unfaithfulness to come between them.  “Let no one tell you that I've been untrue. Don't say you believe them baby. Don't break my heart in two.”  As the rhythm sails along, Cornell explains things are not always as they seem. The chorus implores his true love: “Don't you hear...Don't you speak...Don't you see no Evil.”  In defense of his character, Cornell offers another humble plea; “Cover your ears to all those lies about me, don’t say you believe them, baby” Cornell’s pitch, delivery, and timing meshes perfectly with the rub a dub style riddim.

Cornell Campbell, 76 years young- still continues to perform regularly to sell out crowds all over the world. He continues to record material- usually in combination with younger talents; exposing yet another generation to his legendary voice and humble vibes. Much like the cycle of life, Cornell Campbell finds himself, yet again, in great demand by countless sound system operators, wanting his unique voice on their exclusive dub plates- just like those formative days at Studio One.

“Being a Christian, I dedicate myself to a certain type of life, y'know?- an appropriate lifestyle...because I believe all the time while I was growing up that you must practice what you preach...like if your singing a song 'love your brother, love your sister'- you can’t sing a song like that and go outta street with a big ratchet knife inna your waist...some artists sing a way to the public and them live another life...but, true me have a nice family surroundings...that’s me.”

Could we get a link for today's track?