Scientist Rids the World of the Evil Curse of the Vampires 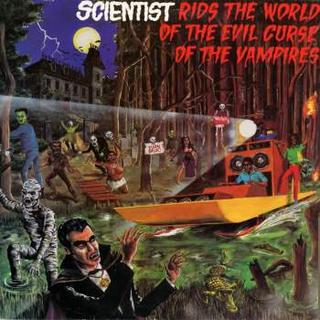 Here’s another reggae Halloween classic! I can’t believe I almost forgot this one! It’s by Scientist, the superstar of early 80’s dub! It was produced and arranged by my favorite dancehall producer the late Henry “Junjo” Lawes and the tracks were laid by the Roots Radics at Channel One and mixed at King Tubby’s by “Scientist at midnight Friday the 13th June 1981,” at least that’s what the cover says! With tracks such as "The Voodoo Curse", "The Corpse Rises" and "Ghost of Frankenstein" to name a few, Scientist has got all your horror bases covered! The classic Tony McDermott cover is alone worth the price of admission!

Scientist Rids the World of the Evil Curse of the Vampires
Posted by John AKA Reggaexx at Monday, October 24, 2005

Glad I could share it - got lots more so please check back often!

Is there anyway you can post this album on rapidshare.com?