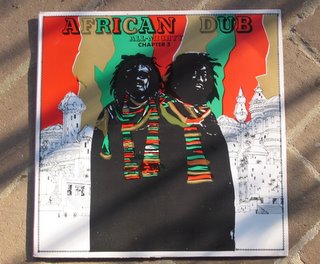 I've got my turntable up and running and today presented here in its entirety is African Dub All-Mighty Chapter 3! Produced by Errol Thompson and Joe Gibbs at Joe Gibbs Recording Studio and released in 1978 this is a pretty decent album. I could go and spend a lot of time trying to paraphrase what is written about this series of important dub albums in Steve Barrow's excellent resource "Reggae the Rough Guide," but it would take a while to get it down as succinctly as he does...

"African Dub All Mighty Chapters 1, 2 & 3 - "Three albums that decisively helped to popularize dub; the first two within the existing reggae market, and the third beyond it to disparate groups like punks and experimental rock fans. The formula was the same on all three: mainly Studio One and Treasure Isle rhythms updated by the Professionals in the 'rockers' style, and given imaginative mixes by Errol Thompson. The more obvious gimmicks - telephones ringing, toilets being flushed, the odd siren, dogs barking, etc. - became more prominent as the series progressed and reached a wider audience. The perspective of time has treated all three albums well." "Reggae the Rough Guide" by Steve Barrow & Peter Dalton

Great great great album. I fell in love with it right after the first seconds of it.

Realy love every second of it.

Laawd! top album. Takes me back to my stoner uni days (77-80) in Norwich UK. Big shout out to ex EAS students of that era. Any chance of any Frankie Paul?

Jd - thanks again! Glad you're diggin' it!

thanks for this, great album! and thanks for taking the time to do this... you are providing a great service, sharing your knowledge and tunes. cheers!

Jacob - thanks so much for the kind words! I've added your blog to my links!