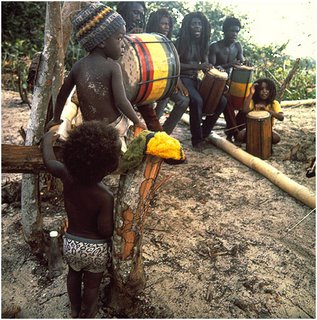 “In Rasta overstanding, Nyahbingi is the mystical power of the Most High to mete justice throughout the universe. Although the genuine origin of the word that means “she possesses many things” is Ugandan, as a concept and theology, Nyahbingi has come down to the Rastaman to signify “death to the oppressors, both black and white.” Therefore, it is through prayer, music and biblical reasonings that the Rastaman chants bingi, calling on the forces of nature to destroy the powers of wickedness.”

“Lyrics reflect the want for universal justice, the Pan-Africanist’s estrangement from the Motherland, his yearning to establish a New Jerusalem in Africa and ultimate wrath of Jah upon Babylon, the present-day Euro-colonialists and white supremacists.”

Did you get all of that? Good. Now here’s where it starts getting tricky and if you don’t have an interest in discussion of musical patterns or the drums involved you can skip ahead to the shares below but, I find that by getting a crash course in what makes Nyahbingi sound the way it does, you’ll have a more enjoyable listening experience…

Mr. Nnamdi continues… “The musical accompaniment consists of a heartbeat rhythm, played in 4/4 time on a trinity of drums. Only Rastamen are allowed to play drums at Nyahbingi. Anyone may play shaka, or shekere.”

Thunder: This is the bottom of the bingi ensemble; there are rarely more than two thunder players at a gathering. It is a typical looking double-headed bass drum, played with a mallet. An open tone on “1” and a dampened stroke on “3”. Occasionally, the thunder player will syncopate the rhythm.

Funde: Although the funde often resembles a requinto, the smallest conga used in Afro-Cuban music, the funde is actually the middle drum used in Nyahbingi; it maintains the dominant heartbeat rhythm as the funde player makes steady, dampened stokes on “1 & 3”; it is thus dually known as the heartbeat and has the least improvisational role.

Repeater: The repeater, or akette, is the smallest and highest pitched drum. It is somewhat of a single elongated bongo. The drummer tends to play around “2 e & a” and “4 e & a”, with a syncopated, rather than a backbeat feel. These beats are important to overall feel of the Nyahbingi rhythm, but the repeater has a very improvisational role in bingi because it is seen as the carrier of the spirit.

Phew! Hopefully you got the gist of that… I’m not a drum player in any real respect and I don’t read music but I found the explanation pretty helpful even to a layman. Now enough classroom time… here’s what I’m sharing…

Taken from the 1983 Heartbeat LP “Churchical Chants of the Nyabingi” – which was recorded at a seven day Nyahbingi held in 1982 when Ronald Reagan visited Jamaica. I hate to do this again but it is so concisely written and so visual - quoting directly from the back of the LPs sleeve… “While the President of the United States was carrying out the affairs of state and enjoying the accolades of “establishment” Jamaica, the hills of upper Trelawney, on the fringe of the famed Cock-pit Country, were ringing with the sound of the Nyahbingi drum while the Rastafari Judgment fire blazed through the night.” 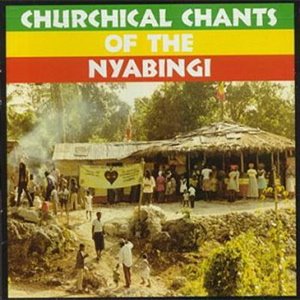 I’ve posted the first four tracks from side one of the album – the chants “Got To Move,” “Tell Them Wherever I Go,” “Weeping And Moaning” and “I, I, I.” Have a listen!