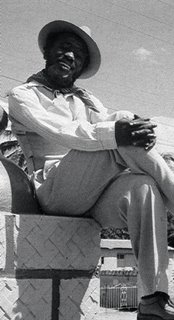 Nicodemus (born Cecil Willington, 1957) started his DJ career in the late 70's/early 80's on the Socialist Roots Sound System alongside selector Danny Dread. His style had been compared to that of Prince Far I and Prince Jazzbo and he went on to record at Channel One with the Roots Radics. Of course he then went on to do some work for Junjo and it resulted in the DJ Clash album versus Toyan which was widely circulated thanks to Greensleeves. He also went on to record the massive hit "Bone Connection" or sometimes referred to as "Boneman Connection."

As the years progressed Nicodemus continued recording and as the 90's approached he suddenly became widely appreciated for being a DJ Veteran and was treated with the respect he was due. His recordings with Supercat and Junior Demus in the late 80's for the album "Cabin Stabbin'" were in my opinion, some of the best material he had ever recorded and it was obvious Nicodemus had re-invented himself and made the smooth transition to the prevalent digital rhythms of the day. Sadly Nicodemus died on August 26, 1996 from diabetes complications.

I could have shared a bunch of singles but when I was driving home from work the other night, the track "Mr. Fabulous" popped up in shuffle mode on the Ipod and I suddenly remembered how much I liked this album. Nicodemus recorded "Nuff Respect" for producer Kenneth Black on the Skengdon label in 1986 and includes his hit "Suzy Wong" - all backing tracks provided by the Fat Man Riddim Section. I'm nearly positive this album has never been released on CD or made readily available with a re-issue so I hope you enjoy it. 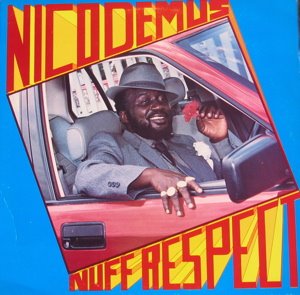 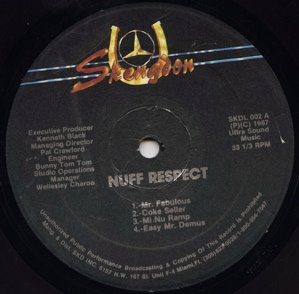 classic! nicodemus at his best, and i'd been unable to find this record. thanks very much for sharing.

Hi, Great blog - loving the focus on these DJ's. If you get time have a look at my blog at; http://microphonic.blogspot.com/ and also our website at www.microphonic.biz

I can't wait to check this out at home this eve... thank you once again for sharing this great music.

I gotta tell you...This is a WICKED album...This is one of those rare jewels that make me get up and skank inna me livin' room....Mi Brain is my favorite cut...

HELP!!!!!! Can anyone help me correctly identify a song I have been looking for since the early 90's. I last heard this song in 1983 and have never heard it since. It might be titled the DJ connection. Some of the words to the sound are: KingStitch connected to starchkie, starchkie connedted to clentis outerboard, outerboard connected to mr huron, huron connected to delinger and so on and so on..... Can some kind soul help me track down the artist and pr title of this song please. Much appreciated.

Deltakilo - the song you're trying to identify is called "MC Connection" by Ringo AKA Johnny Ringo off his 1982 album appropriately called "Johnny Ringo." Hope that helps!

Jahskill - I don't know what the hell happened... your comment got deleted before I could post it...

You said, "I think the record you mean is DJ Connection by Ranking Joe, I know I've been looking for that tune since 1982. Mixed by prince Jammy (King jammy now) baddest piece of mixing by Jammys"

While the Ranking Joe tune is completely badass (and which I just so happen to have in my collection and would be more than happy to share if you still haven't located the record yet), but the lyrics deltakilo was referencing were positively Johnny Ringo's. Unfortunately, I got the artist correct but the song is actually "Connection of Connection" from his album Riding West on the Jah Guidance label.

And check this out Jahskill...

Your quest may soon be over! :)