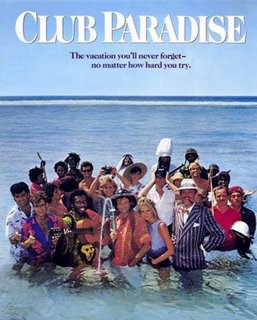 Now to take a complete 180 from yesterday's post... today I'm finally getting around to posting something I promised about a month ago, music from the 1986 film "Club Paradise" starring Robin Williams and Jimmy Cliff. I was hyped up because this movie that I loved so much as a relative newcomer to reggae music was finally being made available on DVD.

It had been years since I'd seen "Club Paradise" and I quickly snatched it up at the local Mega-Mart the weekend it was released and was eagerly anticipating the grand unveiling of a seemingly lost gem after the kids were put to sleep that night! But sadly, it wasn't as good as I remembered. Sure there were a lot of funny parts - I still loved all the scenes with the two Barrys (Rick Moranis and Eugene Levy) trying to score some weed. Levy's lines inside the cab (pictured below) - "So let me get this straight. The deal is that we’re riding in a car with a guy we don’t even know, he’s wearing sunglasses in the middle of the night, taking us up into a jungle. Some godforsaken… nice deal, good negotiating. Why don’t we just hand him our wallets and slit our own throats?" was still good for a laugh. 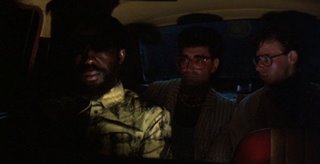 I wouldn't say the movie in its entirety is all bad but there are still good scenes that make the dull parts worth sitting through. Besides if you don't like the plot line you can just soak up the beautiful backgrounds - it was filmed in Port Antonio and some of the locales are absolutely stunning! Sure "Club Paradise" is not a real Jamaican movie like "The Harder They Come" or "Rockers" but it's still enjoyable when you're enduring a seemingly endless winter like I am.

If you've never seen it before I recommend renting it or buying it second hand but if you're like me and kinda grew up on this film it's worth owning for old-times sake.

After a good month of half-hearted searching I finally unearthed the soundtrack LP
in the basement and am sharing 4 tracks for your listening pleasure. I was actually tempted to put up the whole album since it's been out of print for quite some time but like the movie... it's not as good as I remembered it.

I've got 2 Jimmy Cliff tracks - "The Lion Awakes" and "Club Paradise." Also included in the zip is Well, Pleased and Satisfied with the best track on the LP called "Sweetie Come From America" produced by Sonia Pottinger. Finally there is a tune from the U.S. based Blue Riddim Band - a track called "Love People." Hope you enjoy them - have a great weekend! 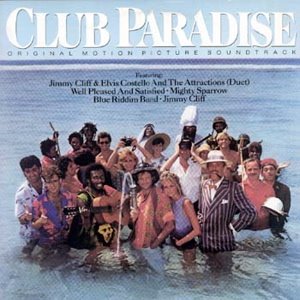 Club Paradise
Posted by John AKA Reggaexx at Friday, March 10, 2006

Here's a stumper for you (or at least what I think could be)...

Been looking everywhere for the last 4 years of a raggae remix/'mashup' (before it's time) of Kenny Roger's "The Gambler" My wife and I heard it on a booze cruise one day while vacationing in St. Lucia.

Ever heard it before? Thanks!

I have a mid 80's version by Yellowman from his "Don't Burn It Down" LP (I even have the 12") but I think the version you're speaking of, which features the ol' Gambler himself, is called "Pharoahe Monch Dub Plate" w/Wyclef Jean. It's available on Wyclef's CD "The Ecleftic: Two Sides To A Book." And to tell you the truth, the cover of the CD looks real familiar - I gotta check at home, I might have it!

Rosey - I have uploaded both versions of the Gambler for your listening pleasure... hopefully one is the tune you've been searching for!

Thanks for the feedback! I grabbed the one you sent me, there was one track in there -- the Yellowman version. That is actually pretty good, I like it, but it's not the one. I'll search out Wyclef's version, maybe that's the one.

Thanks for the info!
-Rosey

Now that's bizarre - I put both versions in that zip file! Oh well... here's Wyclef & Kenny by themselves...

Yeah, "Club Paradise" was pretty cheesy; but hey, it was the 80s!

I've been searching/waiting in vain (hey, that's a song) for years for the Club Paradise soundtrack to come out in digital form. It's some of Jimmy Cliff's best work in my opinion, but apparently not worth reissuing.

Having thrown out my turntable some years ago, and retired my tape deck to the depths of a closet somewhere, I have no way to get this stuff on my iPod. A Google search turned up your posting of a few of the tracks. Any chance I could entice you to digitize the whole album for me? Name your price.

Eowen - I'd be happy to digitize the whole album for you... give me some time to get it together though.

I am desparately working on compiling all the songs from this soundtrack - and have downloaded your zip file (Thanks) - but there are 8 songs I cannot find ANYWHERE. Any help with these would be appreciated - American Plan (Jimmy Cliff), Brightest Star (Jimmy Cliff), You Can't Keep a Good Man Down (Jimmy Cliff), Margarita (Mighty Sparrow), Phillip, My Dear (Mighty Sparrow), Soldier Take Over (Yellowman), Love is a Mony Splendored thing (Paul Francis Webster and Sammy Fain), and Gong Rock (Stewart Copeland) - Can you help me??? nmwrules@yahoo.com

Hey this is really cool. I just saw Club Paradise again after many (many many) years. Some parts of it still hold up, like the Peter O'Toole scenes where he just plays it up. I tried to download the songs, but they weren't there anymore. Not unexpected since its been almost a year since you posted this. Could you repost? I have the cassete of the soundtrack in a box somewhere, but it would be too much work to get it on my music player :)

No way, I've finally tracked down the soundtrack to Club Paradise (well some of the tracks at least) and the post is no longer there :(

I second the request for a digitized version..Please :)

ahhh, Club Paradise, always a good watch, whether on the vhs format I have or dvd, I have enjoyed this movie since I somehow discovered it somehow in the late 80's.Good movie, good feelings.

thanks for keeping this link alive.