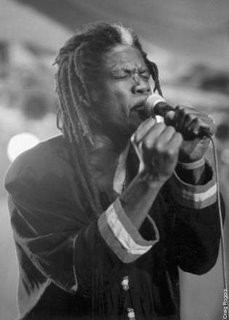 Mutabaruka (Allan Hope, 1952) was born Catholic but discovered Rastafari at an early age. Around that time he also got involved in the Black Awareness movement that had taken hold in Jamaica in the late 60’s and quickly regarded himself as a young revolutionary. His poetry, written in the dialect of the common people, first received recognition in 1971 after being published in a pop music magazine called Swing. Writer John A.L. Golding Jr. summed up his poetry pretty succinctly, “They tell a story common to black people born in the ghetto… and when Muta writes, it’s loud and clear.”

After nearly a decade of performing his poetry live he finally put his words to music in 1981 when the single “Every Time A Ear De Soun’” was released on the High Times label. He followed that up in 1983 when Alligator Records released his first album “Check It” in 1983. You can read a lot more about Mutabaruka's discography, his poetry and his philosophies on his excellent official website.

I could go the easy route and share “Check It” but I think most people already have the album… if you don’t be sure to pick it up – in my opinion it’s one of the best reggae albums, regardless of subgenre, ever recorded. Instead I’m going to share two pretty long tracks on the same riddim, that I was listening to last night. The songs are “The People’s Court Part 1 & 2” and are actually more dramatic presentations set to a rhythm than mainstream poetry. Both tracks are available on the Shanachie Records sampler called “The Ultimate Collection” but originally appeared on Muta’s albums “Blakk Wi Blak…K…K…” and “Melanin Man” respectively, in the early 90’s.

Hey, it might be only 2 tracks but it's a good 13 minutes of enjoyable listening here! Enjoy! 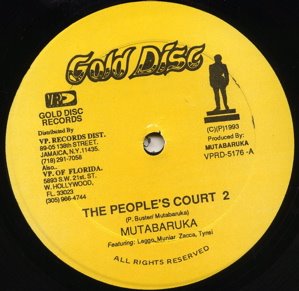 I think that yousendit was temporarily down. It's working fine right now.

Those are some wicked tracks - thanks for sharing!!

I remember hearing a quote from Muta on the global impact of Rastafari. he stated that even if one were to go to Alaska, one would find a dreadlock Alaskan in an igloo.

Hey Fellow, you have a top-notch blog here!
If you have a moment, please have a look at my 2 bmore club music site.
Good luck!

A fantastic blog yours. Keep it up.
If you have a moment, please visit my money online site.
I send you warm regards and wish you continued success.

A fantastic blog yours. Keep it up.
If you have a moment, please visit my dvd reviews Japan site.
I send you warm regards and wish you continued success.

I really would appreciate it if you upped those tracks, thanks in advance